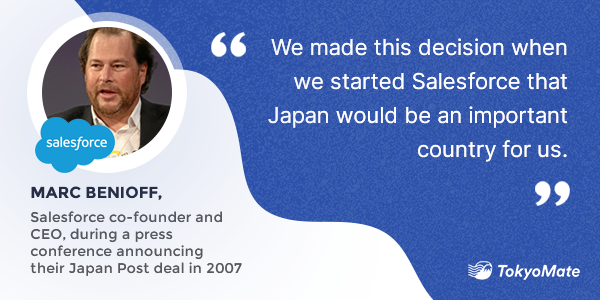 What's Behind Salesforce's Success in Japan?

Salesforce's success story is worth highlighting for many reasons, but the primary one is this:

So when a foreign-owned early-stage startup achieves remarkable success in Japan, it's a cause for celebration and examination.

Today we're covering the reasons for Salesforce's success in Japan, as told by Salesforce's executives. But first…

A quick snapshot of Salesforce

The world's leading cloud-based customer relationship management service was incorporated in March 1999 in the US.

In April 2000, the startup expanded to Japan only a year after founding.

Salesforce Japan went from a one-room office in Shibuya in their early days to snagging Japan Post as a client in 2007 and today records the second-largest Salesforce Economy globally ($18.bn in 2021), second only to the US Salesforce Economy.

For some context on Salesforce's size, the following image shows a market capitalization comparison with the Softbank Group (considered one of the fastest-growing Japanese companies). 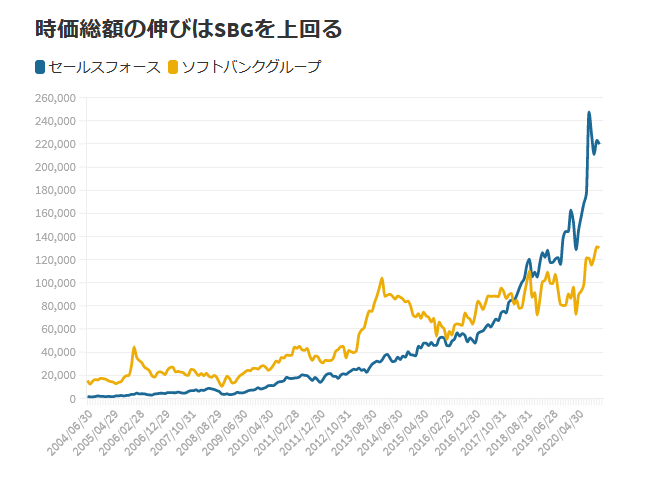 Why has Salesforce been so successful in Japan?

Based on interviews given over the last 20+ years, here are what Salesforce's top executives attribute to the company's success in Japan.

"In general, foreign companies are connected to their overseas headquarters through vertical lines of function, such as sales and service. The headquarters, not the top management in Japan, reviews the business and asks for instructions. However, instead of doing this, we have made it so that everything can be done freely in Japan."—Marc Benioff, on Salesforce's evolution in Japan, translated excerpt from Forbes Japan

Marc Benioff, Salesforce co-founder and CEO, asked longtime friend Shinichi Koide 小出 伸一 to lead Salesforce's efforts in Japan in 2014 as president and chairman of its Japanese subsidiary. This move is believed by many to have bolstered Salesforce's success in Japan.

Before his Salesforce appointment, Koide was president of Hewlett-Packard Japan and his career spans working for Louis Gerstner at IBM and working with Masayoshi Son while serving as COO of Softbank.

Benioff believed that management decisions for Japanese customers must be made from Japan's management in order to hear customer concerns clearly and speedily. Due to the success of Koide's management in Japan, proposals developed within Japan have been replicated for other countries.

"The partnership model has not been widely implemented in other countries, but its success in Japan has made us realize how important this model is. We are still a small company [Editor's note: Interview conducted in 2005], so we believe that partnerships are very important."—Jim Steele (then Salesforce President of Global Sales) during the early days of Salesforce's success in Japan, translated excerpt from ZDnet

And for those who aren't familiar with the gains of Japanese-style partnerships:

"The goal of Japanese partnerships is to increase quality while minimizing the total value-added costs that both the supplier and the purchaser incur. In short, the goal is to create a 'see-through' value chain where both party's costs and problems are visible. Then both parties can work jointly to solve the problems and expand rather than split the pie. JSPs also take advantage of economies of scale in both production and transaction costs. In short, JSPs attempt to capture most of the synergies that would exist if the two firms (or portions of the firms) were combined under common ownership without actually incurring the costs or many of the dysfunctional aspects of combining the firms." (Source: "Japanese-Style Partnerships: Giving Companies a Competitive Edge," Jeffrey H. Dyer and William G. Ouchi, MIT Sloan Management Review)

"I think that Japan has historically had a hierarchical culture. In such a culture, there may be people who feel a certain amount of fear in openly discussing and sharing the direction of the company, as we do in V2MOM. In other words, the fear of whether it is safe to express one's own opinion about where the company should go. However, all the executives I know in Japanese companies want to change. They feel the need to flatten the organization and listen to their employees. I think that's why Salesforce has been so successful in the Japanese market."—Parker Harris, Salesforce's co-founder and CTO, translated excerpt from Diamond Online magazine

In the same interview, Harris noted that "Salesforce allows anyone to email the CEO directly, and there is a shared mailing list." He further highlighted the importance of reducing hierarchy and how millennials today desire a flat organizational structure.

Attracting and keeping Japan's IT talent

"Competition for talent is fierce, especially in the IT industry, so it is important to hire top talent and prevent them from leaving the company. Therefore, what we should focus on is to provide an environment where employees can feel motivated to work. If we can create a chemical reaction that allows employees to demonstrate their individual strengths, we can achieve sustainable growth."— Shinichi Koide, chairman and CEO of Salesforce Japan, translated excerpt from Climbers 2020

One of the characteristics of Salesforce Japan is that it invests a large percentage of its revenue in human resources and workplaces, which Koide has designated as of primary importance.

"I wanted to create an organization where current and new employees would want to work for a long time," said Koide in an interview with Forbes Japan, published August 2021.

The importance Koide has placed on creating a diverse and welcoming company culture is paying off. Salesforce ranked second place in the Best WorkplacesTM Great Place to Work in Japan's 2021 list, which is their seventh entrance to the list to date.

"In recent years, many students have been looking at companies from the perspective of whether or not they are working to solve social issues. The other day, I met a student who chose our company because we have an equality office."—Kumiko Sakayori, senior manager of Salesforce's Equality Office in Japan, translated excerpt from Forbes Japan

"Equality" is a core value within Salesforce's philosophy. This is reflected in Salesforce's hiring and human resource practices, where the company openly embraces diversity in contrast to the majority of Japanese companies that stay silent on such issues.

Millennial and Gen-Z employees increasingly evaluate employment based on elements such as how a company manages its environmental footprint, how it deals with moral and ethical issues, and how it contributes to society.

A final thought on how to build success in Japan

During a press conference held in 2007 to announce their Japan Post deal, when asked about the challenges of the Japan market, Marc Benioff stated, "In Japan, it is very important to be a technology company that is committed first and foremost to the Japanese market. That it is not just a fly-by but that it is a commitment that will last for the life of the company, many multiple decades. It requires patience, perseverance. It requires the building of relationships, it requires having excellent Japanese executives … who are able to provide guidance in the Japanese market. …