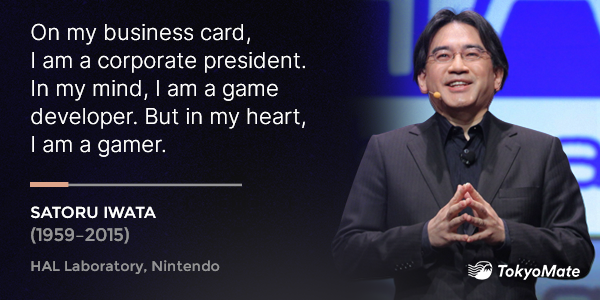 The man who gave the world Nintendo DS and Wii was not only a brilliant programmer and innovator—but also famously a forward-thinking strategist regarding the future of Nintendo and its userbase.

Satoru Iwata (December 6, 1959–July 11, 2015) was president and CEO of Nintendo from 2002 to 2015 and largely credited with making gaming accessible to previously unexplored demographics.

Iwata was dubbed “superman” by fellow programmers for his ability to understand where programming fell short and find solutions when games were floundering in development.

As one example, he helped save Pokemon Gold & Silver, previously too big to fit on the Gameboy cartridge. Not only did he get it to fit, Iwata made so much extra space, he fit the entire map and story from the previous game onto it as a bonus.

Initially hired as a game developer at HAL Laboratory, Iwata was made president of HAL Lab at the age of 33 and tasked with leading the company out of ¥1.5 billion debt, which he accomplished within 6 years.

Nintendo—which had hired HAL Labs as a second-party developer for certain of their games—was closely following Iwata’s career. And when CEO Hiroshi Yamauchi made plans to retire, Yamauchi asked Iwata to take his place as CEO of Nintendo, a position Iwata held from 2002 to the year he passed in 2015.

An inspirational leader, Iwata also famously insisted, “On my business card, I am a corporate president. In my mind, I am a game developer. But in my heart, I am a gamer.”

Iwata’s speech, titled “Heart of a Gamer,” touches on his philosophy for successful products within the gaming industry, with implications beyond the world of games.

Lesson 1. Everyone starts as a “light user”

In the book, Ask Iwata, Iwata notes the following: “Somehow this idea that light users and core users come from different planets has become all too common. … In reality, even the biggest gaming fans—who demonstrate extraordinary skill—were once light users in their own right.”

Lesson 2. Improvement has more than one definition

As a high schooler, Iwata’s first game he coded was built on a calculator and had zero graphics. So it was experiences like this that allowed him to proclaim, “Making games look more photorealistic is not the only way to improve the user experience.”

Indeed, as many game developers are discovering, there’s an end at which photorealism no longer becomes a selling point. What other paths to improvement can you explore?

One example of a different path Iwata explored to improve user experience was the Nintendo DS’s touchscreen.

Creating a touchscreen for gameplay might seem like a foregone conclusion to us today, but back in 2004—approx. 3 years before Steve Jobs introduced the first iPhone—no one else was doing it.

The first Nintendo DS introduced in 2004 with its dual screens, one of which was touch-enabled, made gaming more accessible to newbies by eliminating the need to figure out buttons and controllers.

Chris Kohler, writing for WIRED, in a 2015 tribute to Iwata, poses this question: “Would there be an iPhone without Nintendo DS? Maybe. Maybe not. But it is where touchscreen gaming as we know it now was born.”

From an outside perspective, Iwata appeared to have boundless energy. Not only was he Nintendo’s president and CEO, but he would also step in and look at the programming side, fixing code when needed, giving speeches, and helping with marketing endeavors, too.

In Ask Iwata, Iwata states that his energy came from his work philosophy: “Feeling useful to others and knowing somebody enjoys my work is what gets me through the day.”

Iwata notes that he always looked forward to reading customer surveys and would get excited whenever anyone praised his products or said how much they enjoyed it.

This work philosophy energized Iwata. In fact, he expressly believed it was the reason he was on this earth. “Without that kind of boost, even a wealth of energy will expend itself.”

Lesson 4. People hire you to fix their problems

A story Iwata relates during his GDC keynote regards his early career at HAL Lab: Nintendo had just come out with their new Famicom machine. HAL Lab believed the Famicom machine was perfect for a game they were working on, and they approached Nintendo with their game.

Yes, Nintendo hired them, but not with their game in mind. Instead, they hired HAL Lab to fix a game being developed at Nintendo, but which had fallen behind schedule. “Instead of creating a game, we repaired a game,” says Iwata, “which was eventually released as NES Pinball.”

The conclusions Iwata draws from this: being a good game developer is important—but you also need business sense.

Then there’s also the unstated point that seems obvious in the retelling of Iwata’s story: In business, you’ll have a better chance of people hiring you to fix their problems—not to achieve your dreams.

But by fixing their problems you also get a chance to achieve your dreams.